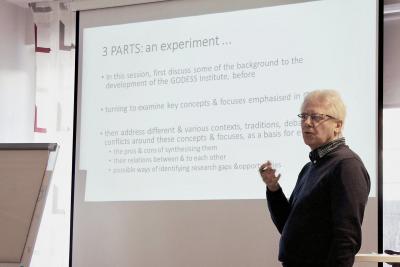 Professor emeritus Jeff Hearn talks about GODESS institute's orgins, its research, and research  It is important to discuss scientific concept in a deeper level. In his presentation, professor emeritus Jeff Hearn analysed concepts, such as, gender, organisation and diversity and demonstrated the complexity of these concepts. One example of this is the concept gender. There has been increased criticism towards the concept of gender, while simultaneously its use in and outside academia has been widely established. As one solution Hearn offered the concept gex that is an umbrella term than includes refers to different ways in which gender and sex may be related to each other, or not.