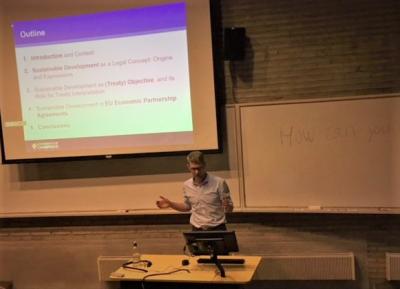 In international law, the concept of sustainable development has an ambiguous meaning and several distinct connotations. Amongst those, the principle of integration and reconciliation of economic, social and environmental aspects functions as its core element. This principle finds support in several general (as well as IP related) provisions of the first comprehensive Economic Partnership Agreement (EPA), signed in October 2008 between the European Community and its member states and the CARIFORUM group of Caribbean Countries. This agreement may serve as a template: not only for EPA-negotiations with other regional groups of African- Caribbean and Pacific (ACP) countries; but equally for other free trade agreements (FTAs) Europe is currently pursuing with India, South Korea, ASEAN countries and states in South- and Central America. Given the continuous malfunctioning of multilateral and mega-regional (such as the TPP) negotiations, the standards set by FTAs are the most important benchmarks which may well be ‘multilateralised’ later on. Against this background, the agenda pursued and the provisions accepted by one of the most important trading blocs are particularly relevant. In the IP context, they not only consist of the obvious ‘TRIPS-plus’ standards to be expected from North-South FTAs, but also several interesting norms which address and are affected by the concept of sustainable development discussed in this paper. In a nutshell, the sustainable development objective indicates the development dimension of the EU – ACP relationship. Examining its operation in the IP context therefore might deliver interesting results.

For more information about Dr Henning Grosse Ruse – Khan, you can visit: https://www.law.cam.ac.uk/people/academic/hm-grosse-ruse-khan/5328

This seminar is jointly organized by the Centre of Corporate Responsibility (CCR) and the Department of Accounting and Commercial Law at Hanken.