At CERS, we have a light, white corner room with big windows that open to the neighbouring playschool’s yard. This fall a visiting researcher Stephane Thion from Toulouse, France, has been working in the corner room. 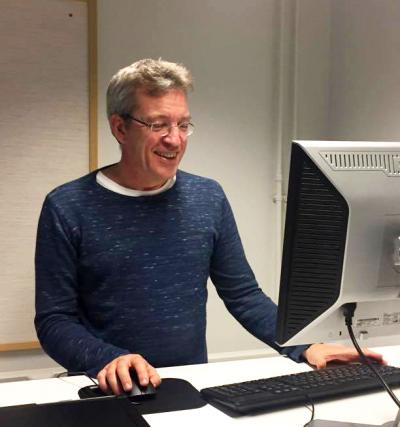 “I chose Hanken because the best researchers in my field are here. CERS is the best place to study this topic”, Stephane says when asked why he had applied a researcher visit at Hanken. Professor Christian Grönroos wished him welcome.Stephane has made a long career at the network operator Orange as a Head of Marketing in a business unit in Lyon, Montpellier and Toulouse, before making his move to the academia. He began his PhD studies 2015 in the University of Toulouse.“It was interesting to jump from business to the academia. Business and research are two very different worlds”, he states, “but I have found out that I can use my experience from business for example in planning my work, planning how to do research”. Stephane tells also that after working in the business world it is easy to see the importance of managerial implications of his study.Value co-creation is the field in which Stephane is interested as a researcher. When we use a product, we often share it with others and like telling about it to others. For example, while showing our new pair of shoes to our friends and promoting them, or suggesting our favorite restaurant to adapt the volume of the ambient music, we create or co-create value.“So, interaction can create value”, Stephane explains. He would like to know more about how to engage consumers in interaction, whether between consumers and the company or between consumers themselves, and how motivation works. What does a consumer gain when using a product and sharing it with others? If consumers’ experiences are positive, they probably gain power, and it perhaps will increase their life satisfaction, he says. In his research, Stephane is testing his theoretical model about value co-creation within two frameworks: service dominant logic, and service logic.Stephane tells he had never visited the Northern countries before. During the fall he has also found some time to explore the city. “Autumn is very colourful and beautiful here”, he says. He has walked around Helsinki, seen its market places, the cathedral, the national museum, and the historic museum. He says he likes the spirit of Helsinki. “It is less stressing here than in countries like France or Germany. Helsinki is peaceful and calm with its long avenues and kind people.”