One of CERS' most long-term researchers, and a strong constructor and upholder of our research center for service and relations marketing, Professor Tore Strandvik is retiring. 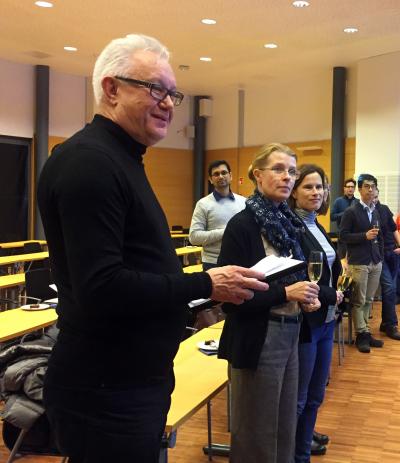 Tore has held a position of Professor of Marketing at Hanken since 1999, authored or co-authored over one hundred academic articles, received several academic prizes, among others the Grönroos Service Research Award in 2016, acted in numerous academic and business-related duties, and supervised probably more students than anyone else, in CERS.Professor Christian Grönroos, a friend and colleague of Tore already from the 80s, defines Tore as a very helpful person. “That is the first word that comes into my mind. Tore has always been ready to take a break from whatever he has been up to, and hurried to help a colleague, was it a problem with a computer or a research project. He is a very friendly character indeed”, Christian comments.Professor, Head of the Department of Marketing Jaakko Aspara thanked Tore for his service at Hanken, in his speech last month in a seminar for PhD students. “Tore has been exceptionally commended as a PhD supervisor”, he said. “He is our best supervisor”, states Christian as well. “He has a genuine interest in thinking and argumenting on other people’s work, and he is widely read, both methodologically and theoretically. He is very innovative in both his teaching and research, and, in the spirit of CERS, genuinly a step ahead.”Tore was among the founders of the research center in 1994. Christian remembers him being the one who argumented that no-one can be specialist in many areas. “He had a significant role in shaping the focus of CERS.”Tore defended his dissertation “Tolerance Zones in Perceived Service Quality” in1994, and has served as a Professor of Marketing since 1999 at CERS, working among services marketing. Before that he held several academic positions, for example as a Professor of Direct Marketing at Hanken, focusing on customer relationships, new media, e-commerce and m-business, and as a Professor in Business Administration at University of Karlstad in Sweden. He is also a Honorary Doctor of Philosophy at Karlstad University, 2012.After his long career at Hanken, Tore is not going to retreat but continues in CERS as a Senior Advisor, orienting to strategy work and developing the research center in the long term, so that his work will benefit our research community also in the future. 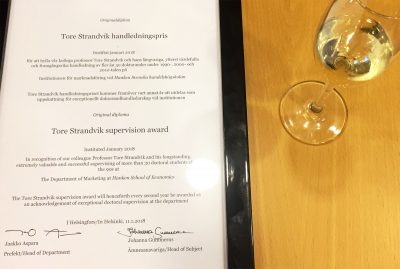 In January 2018, Tore Strandvik was awarded the first Tore Strandvik Supervision Award, in recognition of his long and succesful career as a Phd supervisor at the Department of Marketing at Hanken. Back to CERS page