The Alumna of the Year Heidi Schauman about her new role as Global Head of Research at Danske Bank: I want to be the one who makes things possible

Hanken School of Economics annually appoints the Alumni of the Year, a Hanken Alumnus/Alumna who has been topical in the past year and has received acknowledgement for their engagement in society. The Alumnus/Alumna has also kept contact with Hanken and shown an interest in the development of Hanken after their graduation. This year, Hanken appointed Heidi Schauman as the Alumna of the Year. 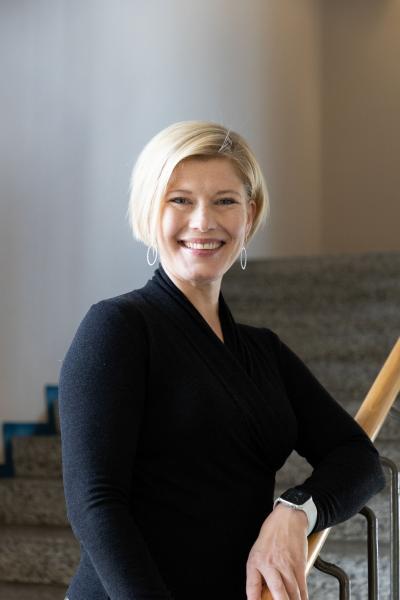 The distinction was published on the Hanken Day at Helsinki on Friday 8 October 2021. See Heidi Schauman's video greeting to the audience at Hanken Day here.

Schauman graduated from Hanken with a master’s degree in 2003 and a doctorate in 2006, majoring in economics. Her doctoral thesis concerned matching in the labour market.

“I’m very happy to nominate Heidi as the Alumna of the Year. With her positive attitude, her great expertise and the ability to communicate it, she is a brilliant role model for researchers as well as students. I also hope that she can inspire more women to study economics, since Finland needs them”, Hanken’s Rector Karen Spens states.

From September 2021, Schauman has been working as the Global Head of Research at Danske Bank. Previously, she worked as chief economist at Swedbank and Aktia, and as an economist at Nordea and the Bank of Finland. She has also been a member of the board of the Finnish National Gallery and the Finnish Cultural Foundation, and a columnist at HBL 2015–2021.

Her new position at Danske Bank is different from what she has worked with before in that she now leads a team of experts, while she has previously been expert herself.

“There are six people, chief economists and risk analysts, in Copenhagen and Stockholm who report to me. I have previously represented much in the media, and this part of my work will now decrease. The new position will also require a great deal of travelling.”

As a leader, Schauman wants to be engaging and supportive.

“I have a good role model for that in Robert Sonck, head of Swedbank Finland. He has been the one who has shed light for us and made everything seem possible. I do not want to be the one who problematizes things but instead one who sees things from the bright side and finds solutions in difficult situations."

Schauman’s doctoral dissertation was about mismatching in the labor market, which means that a part of the work force is unemployed at the same time when there is a lack of a certain type of knowledge. This theme has again become topical.

“Mismatching is seen as one of the biggest challenges in various banks' latest forecasts. Even before the pandemic, many companies stated that one of the biggest reasons they could not grow was that they did not find expertise in certain areas. Now the problem has exploded.”

In her job at Danske Bank, Schauman will have the possibility to get to know how a model that she sees as a good solution to the problem of mismatching, flexicurity, works in practice.

“The principle in the Danish flexicurity model is that it is very easy to fire people, but this is combined with a high level of social security at the beginning of the unemployment period. A lot of resources are invested in finding new jobs for the unemployed, for example through training. It is an expensive system, but at the same time a good way to make the unemployment periods as short as possible.”

Schauman would like to see even greater steps taken in Finland towards a similar model than has been the case so far.

“Finland, as a nation with a tradition of much hard industry, has of course a different economic structure compared to Denmark, where, for example, the design and pharmaceutical industries are large. But both – as is the case also in other Nordic countries –  have a similar set of values ​​with a strong emphasis of welfare.”

Schauman to the students: Try to find your passion

In her time, Schauman started at Hanken because she wanted to study economics at a small department.

“I had been a high school exchange student in the USA and did not want to go abroad to study directly after that period. I wanted to study in Helsinki, and Hanken felt as the most comfortable place and in many ways the best of the three alternatives that could be selected. The institution that I chose turned out to be better than I would have ever dreamed of.”

For all students at Hanken today, Schauman sends her greetings and says that it is worthwhile to try to find what you love.

“Try to find your passion - the factor that makes you work without pay, because you are going to work for a very long time with what later becomes your profession. It is a good thing to have an education that already incites you and gives you an inner glow.”