Hanken School of Economics has been ranked among the world’s top 10 universities in the global U-Multirank university ranking on research and research linkages. The result is the best in the Nordic countries.

This year the number of insitutions ranked increased by 300 from previous years. 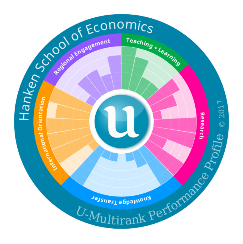 It now includes 1600 institutions from 95 countries compared to earlier 1300 institutions. Despite the increased competition Hanken continues to perform extremely well.

-Our continued success in this ranking is solid proof of Hanken’s research being of internationally high standard. We continue to punch well above our weight, says Hanken’s Rector Karen Spens.

Hanken ranks particularly high on citation rate and top cited publications, as well as on international joint publications.
- There are only three European universities among the top 10 measured according to the top cited publications indicator. That goes to show that we have been successful in our efforts to encourage our faculty to publish in top journals and cooperate internationally, states Timo Korkeamäki, Dean of Research.

U-Multirank compares 1 600 universities within a number of variables, such as research, teaching and learning, and international orientation. Hanken performs extremely well in variables such as international student mobility, post doc positions, share of international faculty, and share of private funding.

U-Multirank is the first global ranking to offer a full picture of the diversity of university performance. U-Multirank is developed and implemented by an independent consortium that consists of European higher education institutions and is supported by the European Commission.

Read more about the ranking: www.umultirank.org